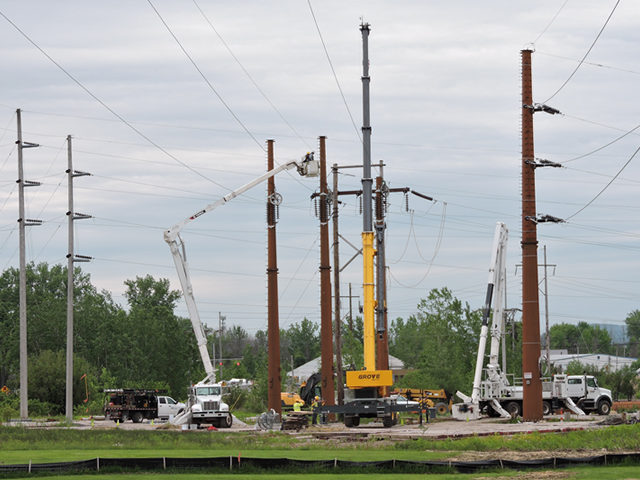 Three Phase Line Construction, Inc. is rebuilding National Grid’s existing Clay-DeWitt Line 3 and Clay-Teall Line 10 115kV-transmission lines near Syracuse, N.Y. The project consists of replacing existing conductors on two lines with new higher capacity conductors, replacing or modifying a majority of the pole structures, relocating a portion of the lines to the center of the right of way (ROW), and relocating other portions to a different ROW corridor.

The project is designed to increase grid reliability for customers receiving power from this line. By replacing older wooden structures and conductors with modern equipment, the new line will be less susceptible to outages caused by infrastructure failure. There will be less dependence on localized electrical generating facilities and promote more electrical generation diversity (e.g., renewables). There will also be greater power reliability for businesses and the local economy.

This project is unique in terms of its size and the environmental challenges. As an Article VII project, the New York State Public Service Law sets forth a process to review the need for, and environmental impact of, the siting, design, construction and operation of certain major electric and gas transmission facilities. The Clay-DeWitt and Clay-Teall line project limits of disturbance are meticulously mapped and delineated in the field and all construction related activity must remain within those limits, no exceptions. Even a single tire track left outside the limits of disturbance could result in a notice of non-compliance with the permit. The project crosses several NYSDEC and federally regulated wetlands, three interstate highways, one state highway and one railroad.  The total length of the new construction for this project is 14 miles, which is about 25 circuit miles. There are also about four miles of existing double-circuit line getting wrecked out.

The anticipated project completion is 2021